iPad and Tablet Market Forecasts for 2012 and Beyond

I’ve aggregated, crunched and charted the public forecasts of the tech industry’s brightest analysts to see where they think the market for iPads, Amazon Kindle Fires and other Android tablets is headed.

This includes forecasts from both Wall Street and industry analysts, and is current as of March 27, 2012.

It’s a follow-on to my post last year, where I also collected forecasts for 2011′s iPad and tablet markets.

Interestingly, the consensus on 2011′s iPad market with only six weeks left in the year (mid-November) was for 33.5 million iPads sold.

Analysts have continually underestimated iPad and tablet demand. This year alone, many analysts have already raised their estimates for iPad salestwice:

– after the new iPad was unveiled on March 7;
– after it was revealed March 20 that 3 million new iPads sold in its first weekend;

Impressive. You know what’s even more impressive? The $1.8 billion in revenue Apple reaped in just 3 days (based on an average selling price (ASP) of $600 per iPad).

$1.8 billion is nearly 4x larger the sales of the best global movie opening ever. That would be last summer’s Harry Potter and the Deathly Hallows Part II, which nabbed $483 million in its first weekend.

Without further chit-chat, here are the charts and graphics. Click to see larger versions and right-click on them to save. 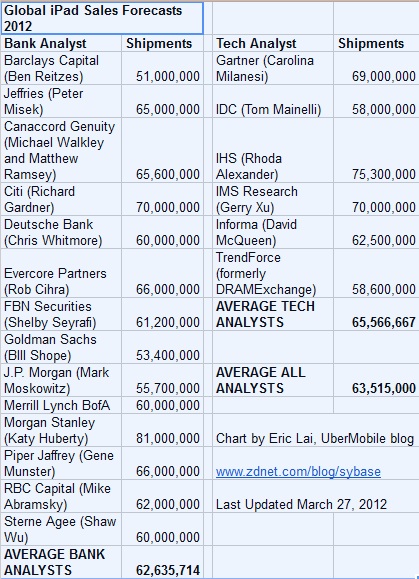 63.5 million iPads is up 50% from 42.3 million iPads sold in 2011, which is the average of publicly-announced analyst figures from TrendForce, Strategy Analytics, DisplaySearch, Merrill Lynch and others.

Raging Bull of this crowd? Morgan Stanley‘s Katy Huberty, who sees as many as 81 million iPads sold this year. Second place goes to IHS’s Rhoda Alexander with 75.3 million.

Dour Bear? Barclay’s Ben Reitzes, whose most recent forecast I could find was at 51 million. Here they are again, in columnar form: 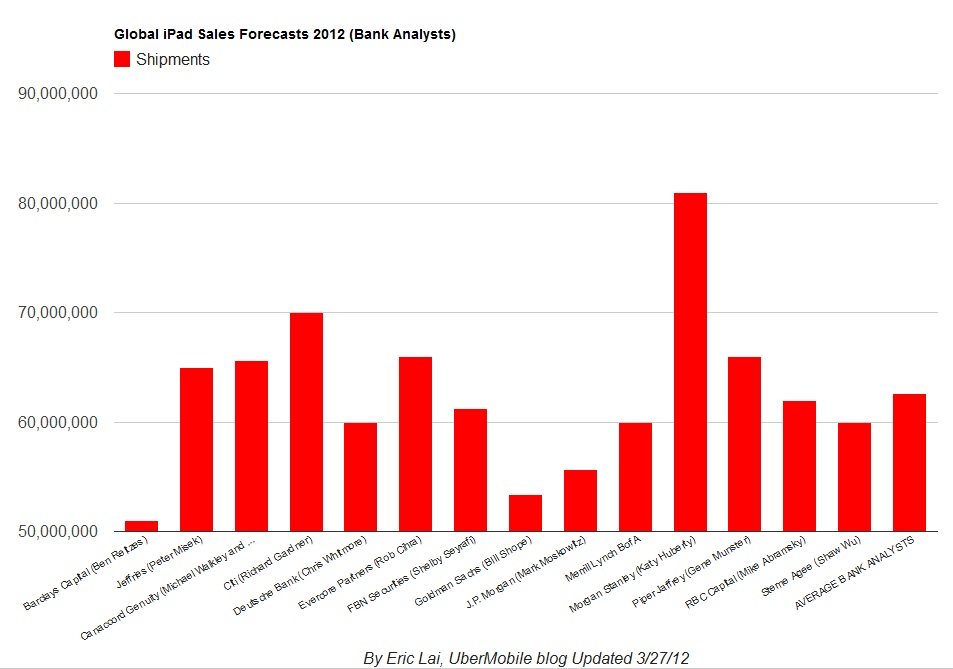 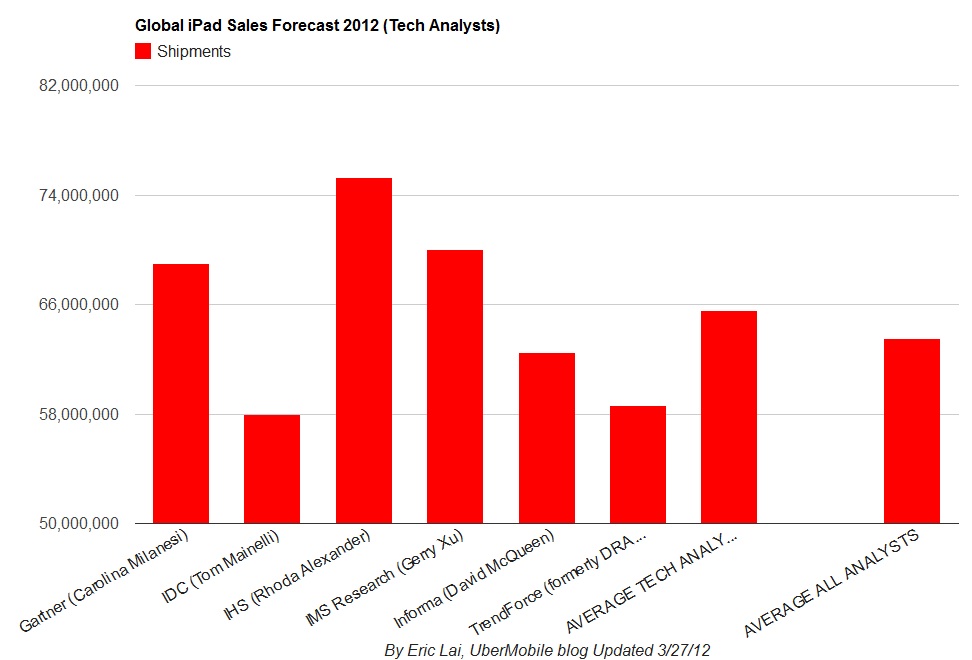 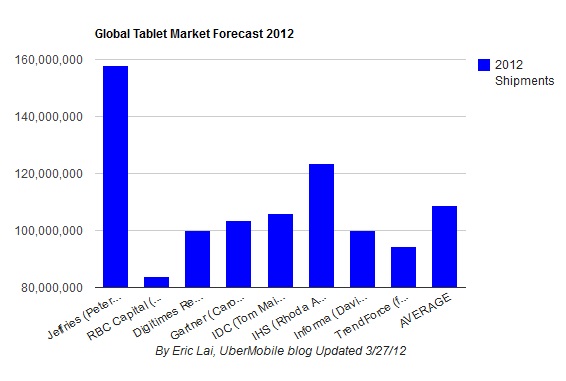 Here it is in graphical form. Overall, analysts expect iPads to still control 58% of the tablet market this year. 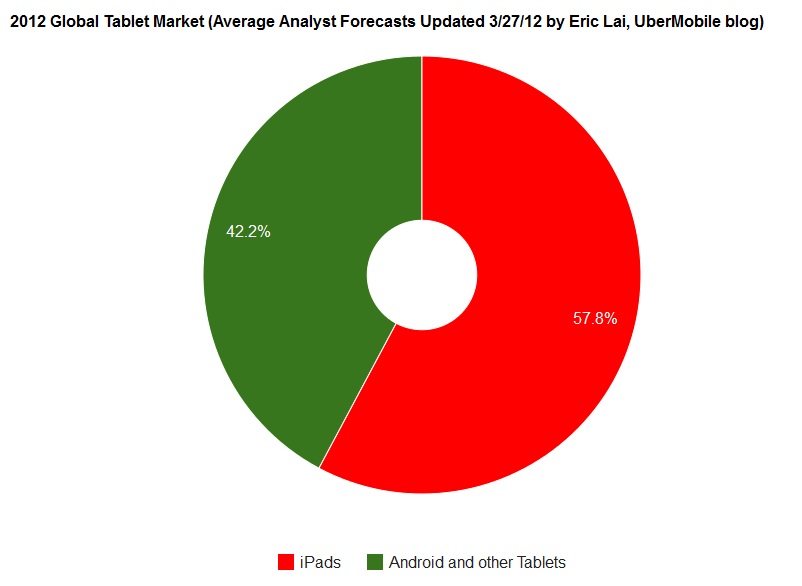 And what of the long-term? Granted, the number of forecasts for years past 2013 is much smaller; in some cases, it’s a lone firm or analyst putting him or herself out there.

But I’ve still built out a table and stacked bar chart that includes all of the forecasts that I could find. Analysts expect the number of iPads sold to nearly quadruple from 2011 to 2016, and the number of other tablets – Android, Windows 8, RIM – to increase nearly sevenfold. iPads will still hold a tenuous lead over non-Apple tablets by 2016. 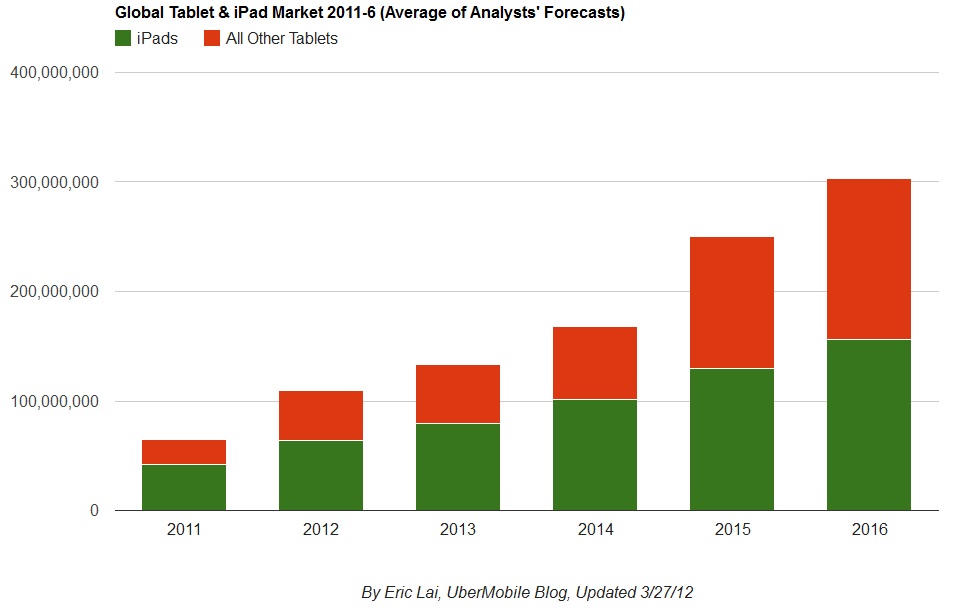 And, in stacked bar chart form.

Newsbyte — WALLDORF — SAP SE (NYSE: SAP) today announced the next step in its commitment to bring an enhanced app experience to enterprise Mac users with...

TripIt Update: Your Flight’s Carbon Footprint, at Your Fingertips

Feature Article — Frequent travelers who want to better understand — and act upon — their carbon footprint now have a new tool in their toolkit, thanks to...